The Dungeon King has found what he thinks is a yo-yo. However, when he starts to use it, he soon realises that it's actually a spider.

How to use toy

Stand still in an open area for 10 seconds. Then press any key to use yo-yo. Put yo-yo away by moving the player in any direction.

For more fun, when the yo-yo spider is on the floor, wait 5 seconds to find out what happens...

Interact with the toy in the yo-yo state by tapping any key to move the yo-yo up and down.

Interact with the toy in In the spider state by  destroying the landscape around him and see where he goes or where he takes you if you stand on him. You can also use explosions to change the direction the yo-yo spider runs in.

You are a king that is trapped in the dungeon of his own castle. Your fancy gold sword is bent out of shape when you fell inside but luckily you find some dynamite. So you combine them together to give yourself a unique ability - you put the BOOM in boomerang!

What's new in round 1 (updated version)

What's new in round 2 (updated version)

The following sound effects were from freesound.org and have a creative commons license 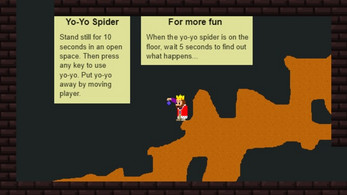 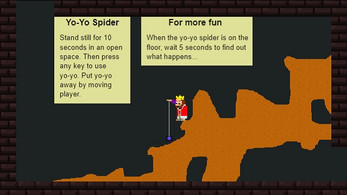 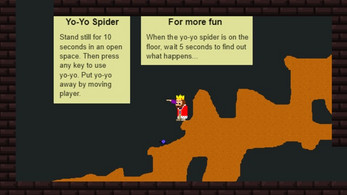 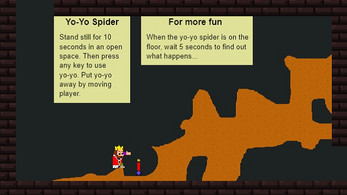